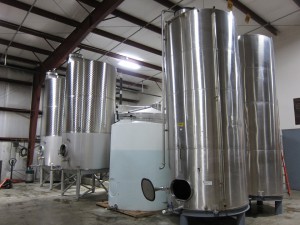 Right now, the G-R distillery actually functions as two distilleries, operating under a space-sharing arrangement complying with complex governmental regulations for “Alternating Premises.” G-R, whose brandy license does not allow it to make whiskey, leases space and equipment to Crispin Cain’s Tamar Distillery, which has a license allowing production of all kinds of distilled spirits. This is where Crispin is distilling and aging Low Gap whiskey and distilling Russell Henry gin.

When Hubert and I were putting G-R together (starting in 1982), we didn’t have much money. We looked around for used stainless steel tanks, which are used to store distilling wine, heads and tails from the distillation run, and brandy when it is being readied for bottling.  We found three used wine and dairy tanks, which we could use for storing distilling wine and tails, but thankfully somebody told us that the normal stainless steel these tanks were made of didn’t stand up to high alcohols.  It turns out that, for brandy, we needed tanks made of a stainless steel called Type 316 (normal is Type 304), which is .03% molybdenum and less than .08% carbon.  What this means in real life is that Type 316 resists corrosion. Strong alcohol is a very powerful solvent, and if you put brandy or whiskey in a standard Type 304 stainless wine tank, the spirit may pick up an undesirable metallic taste. Unfortunately for us, Type 316 costs more.

Coming back to this week, we were able to find two used Type 316 tanks in a pharmaceutical plant that was going out of business, so it wasn’t too bad of a hit.  We were able to get a good price on the other two because of the recession.

Two of the tanks will be used by G-R for blending a pear liqueur and for stabilizing and filtering an expanded production of apple brandy (a new version, to be released in 2013, is based on heirloom cultivars).  The two tanks in the background are leased to Tamar for fermenting beer to be distilled into Low Gap whiskey, and also for Crispin Cain’s gin project/ansley coale