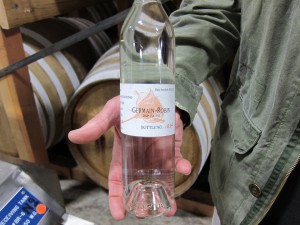 Recently I was out in the market with a stick-on labeled bottle of Germain-Robin Viognier grappa, stick-on because we had just bottled it and hadn’t gotten around to the hand-labeling.  I received some pleasant words about its quality. Here’s why.

Traditionally, grappa is made using just the pomace, which is what’s left (the grapeskins, stems, and seeds), after you press the juice out of grapes. You add some sugar and water to this. The water is to pick up some of the residual flavor and make it possible to distill; the sugar is so there so that the pomace, when fermented, will contain enough alcohol for distillation.  It used to be just a cheap way of making booze with leftovers. It can be pretty crude, especially if you let the pomace lie around for a couple of days, and a lot of people have had unpleasant experiences with grappa.  In the late ’80′s, several quality Italian producers started using the entire grape, juice and pomace together, to make their grappa, and that is what Germain-Robin does.  As a result, our grappa is noticeably brandy-like.  We call the process “whole-berry.”

Germain-Robin makes grappa mostly for fun: one batch is about 90 gallons, about 75 cases of the 375ml bottle we put it in. This is really not a commercial amount, and we sell more than half of it out of the tasting room.  The Germain-Robin distillers like to experiment. They don’t make the same grappas year after year. They’ve tried muscat, they’ve tried riesling, they’ve tried merlot, but their favorites are syrah, viognier, and zinfandel. This is the second time they’ve bottled viognier as a grappa.

The grapes for the grappas don’t always come from the same vineyards.  We simply keep an eye open for a small quantity of likely grapes.  As it turns out, only about one batch in three is good enough to stand on its own as a grappa.  When a batch is not up to snuff, we age the distillate in oak as a brandy and use it for blending: a little extra complexity.

Viognier is an interesting grape.  Wine made from viognier is beautifully aromatic (peaches!), and despite a somewhat undistinguished reputation can be surprisingly complex. Germain-Robin has found  – from many years of distilling excellent varietal wine grapes – that the varietal characteristics that you notice in the wine come across very clearly when you use the wine for distilling: viognier brandy/grappa has beautiful peach aromatics. It’s also very soft in comparison to other distilled wine spirits: there’s very little sense of alcohol.  This characteristic of viognier was the secret behind Hangar One straight vodka. The St. George distillers blended in a vodka made on a pot still from lees of viognier wine, and as a result, the vodka had none of that unpleasant ethanol vodka smell.

One of the viogniers G-R made for grappa was so good and so distinctive that we bottled it as one of our series of single-barrel varietal brandies. It was amazing, one of the best things we ever made. I have half a bottle at home, that’s it: came and went/ansley coale