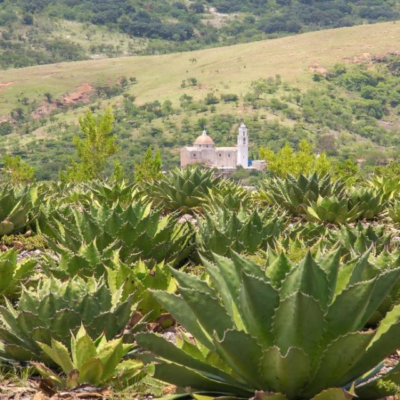 MOUNTAINSIDE AGAVES ABOVE A REMOTE PUEBLO IN THE SIERRA 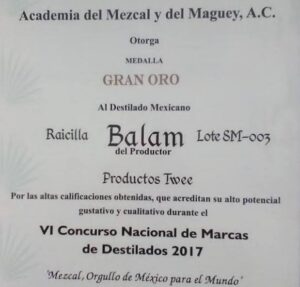 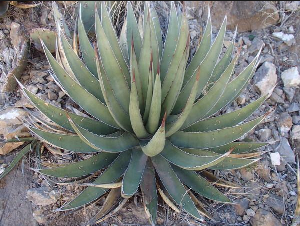 AGAVE LECHUGUILLA, IT IS A VERY SMALL PLANT

The raicilleros and sotoleros with whom Villagrán works produce cleanly distilled and distinctive agave spirits. Assembling a set of such consistently outstanding spirits requires patience, dedication, love of the artisanal process, and respect for the humans who produce them.

BALAM Raicilla de la Costa. Gold Medal at the Concurso Nacional in 2017.  From Rosalio Rodriguez in El Tuito in the mountains of Cabo Corriente, south of Puerto Escondido. Rodriguez distills chico aguiar (agave angustifolia) and agave rhodacantha, both wild and grown in his own fields. The climate is moderated by being close to the sea: spicy and nicely vegetal.   47% abv. $75

BALAM Raicilla Extra Añejo.  Since 2012, Rosalio annually aged one barrel of rhodacantha for a year, then adds it to a tank. In 2019, he filled a small barrel with the aged assemblage for a month of integration and filled 274 bottles. Rich, mellow, and deep. Truly one of a kind. 43% abv. $92

BALAM Raicilla Madurado de la Costa– RSP $96.  A solera of rhodacantha added to annually since 2004. 559 bottles, average age more than 8 years. There is nothing like it made from agaves. Complex and very mellow. 47.7% abv. $96

BALAM Raicilla de la Sierra.  Gold Medal at the Concusro Nacional in 2018.  From Benito Salcedo Rios in El Mosco, a tiny pueblo (pop. 148) at 3200 feet in the Sierra Madre south of Mascota. Benito is an agronomist, and you can taste his feel for the plant: lechuguilla (agave Maximiliana), an agave he working on cultivating for sustainability. Focused and very cleanly distilled.46% abv. $75 .

BALAM  Destilado de Agave Sierra del Tigre. Unreal product. Ancestral distillation on a Filipino still by Chuy Lapian in Las Agujas (pop. 48, at 5100 ft) in the Sierra del Tigre southwest of Guadalajara. His distillation is as authentic as it gets: like many Jaliscans, he uses a masonry (brick) above-ground oven to roast wild agave inaequidens. The lengthy (23-day) fermentation and single distillation to high alcohol of a single 400-bottle batch yields a raicilla of notable focus and lactic complexity. Big. Lupian has such contempt for modern production methods that he won’t call his distillate raicilla. 43.8% abv. $120

BALAM  Sotol Desierto.  Dasylirion Wheeleri distilled with artisanal methods by Enrique Valencia in the pueblo of Coyame (at 4000 ft) in the high Sonoran desert of Chihuahua. Hand-milled. Sotol growing in a colder and dry climate yields intensity with plaenty of minerality; a touch of sweetness. Focused and nicely clean. 48% abv. $75

BALAM  Sotol Durango. Gold Medal at the 2019 Concurso Nacional and in 2021. Dasylirion Wheeleri distilled with artisanal methods by Jesús Román in Peñon Blanco at 5200 feet in Durango. Hand-milled. Sotol from the mountains is softer and fruitier. Long complex finish. 47% abv. $75